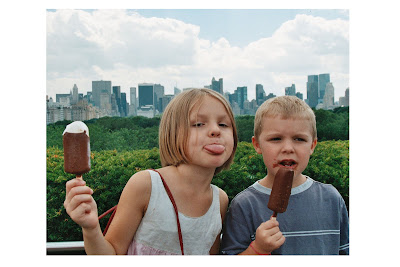 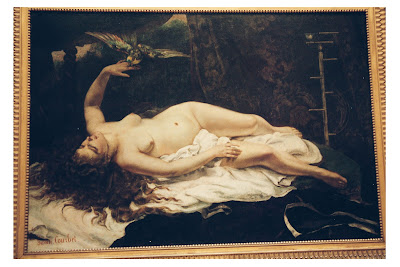 One of the highlights of a recent visit to New York back in July was a trip to the Met with our good friends' kids who live in Queens. Esther and Lemuel had never been to the Met and I assured them that they where in for a surprise. We began our adventure on the rooftop of the Met where ice cream was enjoyed while checking out

Doug + Mike Starn on the Roof: Big Bambú- a monumental, sprawling, display of bound bamboo sticks that transformed into an architectural maze that one could tour if patient enough to acquire a precious ticket-we just watched and took in the views of the park and city.
From the rooftop we made our way down to the Impressionists-George Seurat was a big hit with his dots of color. We came across a Courbet (one of my favorite painters of all time, and told the kids so) they thought the parrot was beautiful(in their words) but thought it was a little weird that the woman was not wearing any clothes.
Esther and Lemuel then wanted to see the Arms and Armour wing which instantly became a favorite spot. They found the Samurai masks funny and some of the swords a bit rusty.
A very memorable day spent at the Met-kids know how to energize a place especially when they are touching all of the art.
Posted by Where I'm Calling From at 11:42 AM