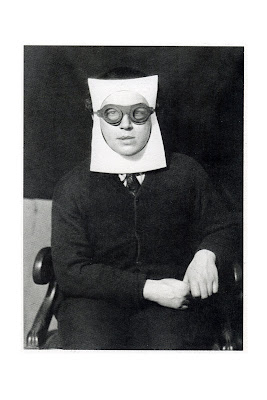 In Rosalind Krauss’ book, Passages in Modern Sculpture there is a chapter on Dada and Surrealist sculpture-particular to its origin. The chapter is titled, A Game Plan: the terms of surrealism-the word “game” should be highlighted as the key by which many of the poets and artists would subscribe to birth irrational works.
Krauss opens the chapter with one such game for poets, disguised as a recipe by Tristan Tzara. It reads as follows:

Take a newspaper.
Take some scissors.
Choose an article of the length
you wish your poem to have.
Cut out the article.
Then cut out carefully each of the words in the article
and put them in a bag.
Shake gently.
Then pull out each cutting one after the other.
Copy them down conscientiously
in the order in which they left the bag.
The poem will resemble you.
And you will be a writer of infinite originality and of
charming sensitivity, although incomprehensible to the masses.

Krauss goes on to state that, “…if an ordered structure is the means of endowing a work of art with intelligibility, then the breakdown of structure is one way of altering the viewer to the futility of analysis. It is a form of shattering the work as mirroring the rational powers of its viewer…Dada’s enemy was a priori, the power of reason, and, most particularly, reason as a vehicle of power.”
Further in the chapter is a bit on objective chance that follows a similar pattern to the poet’s recipe, “Andre Breton’s documentary novel L’Amour fou is an account of the workings of objective chance. At its outset Breton and Alberto Giacometti wander through a flea market where each purchases an object without knowing why, only later realizing that the object, found by chance, answered a question that had been unconscious. Breton’s question, posed by the automatically produced phrase “Cinderella ashtray”, a phrase that had obsessed him earlier, had been the unwitting formulation of his own desire for love; and the slipper spoon that he had found in the market became for him the double sign through which he could read that desire and believe that he would gratify it. Giacometti’s object served in the completion of a sculpture.”
I believe that Surrealism and Dada have had the longest lasting impression on contemporary Western sculpture with post Minimalist works right on the heel. The grab-bag reasons of chance, disorder, and irrationality have reigned supreme for quite some length of time in the past couple of decades. It is perhaps the notion that chance and incoherence are the easiest ways of dodging rational explanations for an irrational practice, but its long standing explorations may be because it is still such a fertile vein for revealing subconscious thought and desire.
Posted by Where I'm Calling From at 9:15 AM