The Resemblance of Things 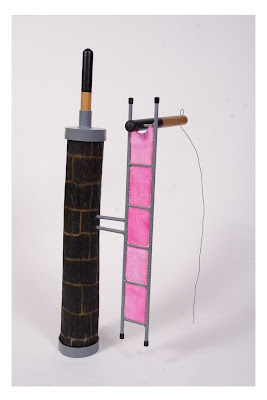 In an interview with Claes Oldenburg conducted by David Sylvester, Oldenburg is asked a question concerning the playful invention in his work in relation to artists such as Arp, Klee, and the Surrealists. Oldenburg’s answer: “I have the feeling that my work is more concerned simply with the appearances of things rather than the meaning attached to things. If I found a resemblance between things, I wouldn’t make very much of it. I would only be concerned with the form…I have the feeling that nature is very simple and I have the feeling that everything really looks like everything else. If we could get our eyes adjusted we’d find that the whole world was very simple, whereas it appears very complicated. I always look for an extremely simple form in whatever I see and try to find another simple form that looks like it. And it’s to cope with the environment, I suppose, to get it down to a workable condition…”
Above is a sculpture from last year, “Marquee”. It is basically two objects that have been conjoined to make one. The fence post has the appearance of being solid and rooted to its particular plot while the metal ladder form juts out parallel. The ladder form however does not suspend in space but is rather propped by a wisp of wire to counterbalance the weight. The mass of the fence post wavers as much as the economy of the wire. This object appears to have been logically engineered but yields to a make-shift solution.
Posted by Where I'm Calling From at 10:16 AM