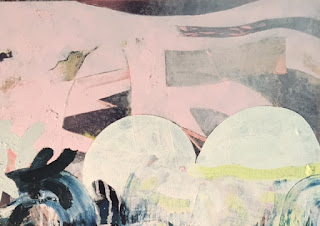 A detail of a new painting materializing.
"Magic Quarter Hour"

from J.D. Salinger- Seymour, An Introduction

One late afternoon, at that faintly soupy quarter of an hour in New York when the street lights have just been turned on and the parking lights of cars are just getting turned on-some on, some still off-I was playing curb marbles with a boy named Ira Yankauer, on the farther side of the side street just opposite the canvas canopy of our apartment house. I was eight. I was using Seymour's technique, or trying to-his side flick, his way of widely curving his marble at the other guy's-and I was losing steadily. Steadily but painlessly. For it was the time of day when New York City boys are much like Tiffin, Ohio, boys who hear a distant train whistle just as the last cow is being driven into the barn. At the magic quarter hour, if you lose marbles, you lose just marbles. Ira, too, I think, was properly time-suspended, and if so, all he could have been winning was marbles. Out of this quietness, and entirely in key with it, Seymour called to me.
Posted by Where I'm Calling From at 9:00 AM