The "Break Off" Point 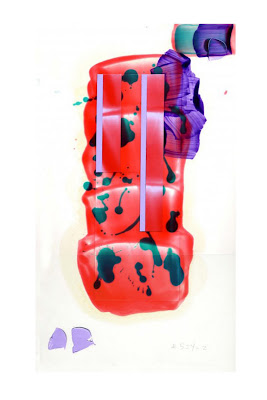 This is an excerpt from an interview with painter David Reed taken from the book, ‘Between Artists’.
Reed: Painters discover in the process of working that painting itself is a kind of nonverbal thinking. This kind of thinking is difficult to describe-often it can’t be expressed in language for a generation or two. What can’t be verbalized is unnerving. When I first started working abstractly, part of me would identify with the painting, as if I were inside it working through the forms. Another part of me would stay outside and watch what was happening. I felt split in two. I was afraid that I couldn’t come back together again. In some of my first stroke paintings, the idea was to work so quickly that I knew I could get the two parts back together. Finally, I decided that this experience of being split apart was necessary to make a painting. I learned just to grit my teeth and take it. Then in Tom Wolfe’s book ‘The Right Stuff’, I read about a similar experience. When the test pilots for the X-2 got up to the edge of space, they reached a point they called the “break off”. The pilot was no longer in his body but saw himself from above and behind at the same time. He felt at one with the plane. He belonged in space, not on earth, and could do anything he wanted-then he crashed. I still have to go through that break-off point with each painting, but now I know it’s part of the process.
*image, David Reed, Color Study
Posted by Where I'm Calling From at 4:08 PM